‘You have to believe people deserve better’: love for family drives passion for inclusion 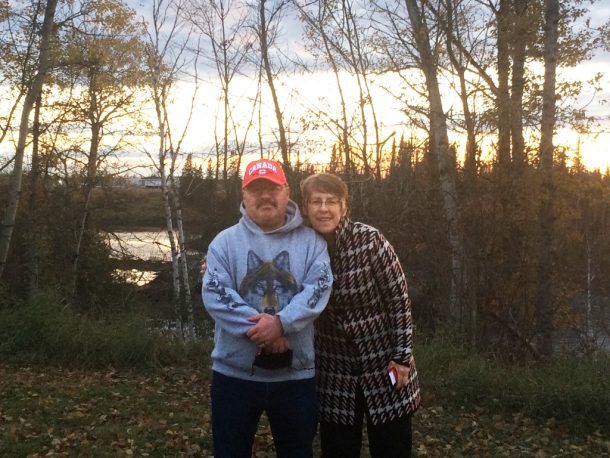 One decision made all the difference for Lorraine Morin’s family.

Her brother, Marcel Chartrand, was labelled “mentally re******” at age 4. No further diagnosis was provided, but the family believes Marcel may have suffered from lack of oxygen in the birth canal during a difficult labour. The family lived in Kapuskasing and had travelled to Toronto for assessments after concerns Marcel was developing skills at a slower pace than Lorraine, his younger sister.

Lorraine, a retired inclusive business owner, and her husband, Gerry, have called Huntsville home since moving here from Kapuskasing about 35 years ago. Lorraine joined the Community Living Huntsville board of directors in 2021.

She remains closely connected with her Kapuskasing family, especially Marcel, who she FaceTimes with every day.

A lifetime of advocacy

“I’ve always been his advocate,” she says. It started when they were kids. She stuck up for her brother whenever he was bullied. Now, she advocates for services and supports so her brother can fully live his life in his community. She encourages him to try new things and, despite his shyness and initial anxiety, supports him to embrace social settings, which he loves once comfortable. She models the behaviour she wants to see in others.

Lorraine is helping Marcel plan for the future, too, as their parent age, but lack of housing options is a serious problem.

“The only option now, as our mom and dad are getting older, is a nursing home,” says Lorraine. She, like the rising tide of people, families, and advocates across Ontario, is adamant long-term care is the wrong place for people with developmental disabilities who do not need those services.

Instead, argues Lorraine, communities need to create integrated, supportive housing near community-based services, and provide access to flexible supports that meets a person’s changing needs through life. That way, people can continue to live their lives with self-determination as active, included community members, without the threat of separation from it.

It’s the same reason she is grateful her brother was never forced into an institution as a child.

The power of community

“I see his anxiety when he is in a social setting, and I don’t know if he would have done well in an institution, being grouped together with people for no reason other than they had disabilities. And to be exposed to only that environment limits your ability to show what you can do,” says Lorraine. “I really think the reason he has thrived as a person is because he was in a family setting with support, love, comfort, confidence, and community.”

And Marcel has community. Lorraine notes, for example, that when her brother takes a walk around town everybody knows him. Inclusion has benefitted community attitudes over the years, too.

“Because Marcel has lived in Kapuskasing his whole life, and he is such a fun person who loves to laugh and joke around, he has a lot of people in the community who know that about him now, and they just treat him like Marcel. It’s good that way,” says Lorraine.

Her brother, she says, also has support from his local Community Living organization to further connect with community and meaningfully pursue his interests and passions, like cooking, hiking, and ice fishing: “He loves being outdoors.”

Lorraine, as a board member for Community Living Huntsville, wants to continue to champion choice and inclusion for people and families in her community. That includes promoting community-based skills-building and employment opportunities for people with disabilities, boosting public understanding and acceptance of developmental disabilities, and advocating for access to community-based housing and supports.

She also wants people with disabilities to be considered, consulted, and heard when public infrastructure and housing development happens.

She feels she has a supportive team at Community Living Huntsville. “I think it’s a really good group of people with a similar passion,” says Lorraine. “It’s where their heart is. … You have to believe that people with developmental disabilities deserve better than what they get.”

Community Living Huntsville is a not-for-profit, registered charity that supports and advocates alongside people with developmental disabilities and families to live, work, and play in unique and purposeful ways in North Muskoka. Find more at clhuntsville.ca or follow us on Facebook, Instagram, Twitter, Linkedin and TikTok.